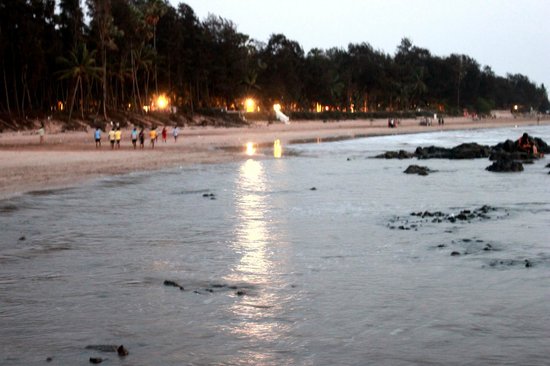 Mumbai, Bombay is the most populated city of India.  It is one of the mega cities in India. Mumbai has many attraction sites for tourists like ancient buildings, museums, zoo and beautiful places beaches. Beaches are good recreational places. We all suffer from stress and tensions, to feel relax and release tension one can visit the beach.

Manori is a small village in the north part of Mumbai. The village is famous for its and beach and localities. The village is divided into three parts called Koliwada, Bhandarwada and Panchghar the beach is the common tourist place and is covered with deep white sand.

The atmosphere and culture of the beach resemble very much to Goa hence called as mini Goa. The beach is not so crowded. Hence away from the city crowd, one can feel peace. The place is surrounded by palm and cashew nuts adding to the beauty of the beach. At night, the white sand crystals appear like stars in the sky.

There three common localities surrounded by the village known as Kolis, Bhundras and Kunabis. The occupation of most of them is fishing or farming. Christianity is followed by the surrounding people.

The weather is hot and humid throughout the summer but cold in winters. Whereas the village nights are cool at night too. The best place to visit the beach is from October to February.

The place is surrounded by many tourist places. It is adjacent to Gorai and Indian beach. Shiva temple has a lot of religious importance for Hindu followers. Global Vipassana pagoda is one the largest building and is composed of the bones of the Buddha. It is followed by the church along with it. And is one of the most visited places by the Christian community. Ancient Hindu spiritual follower temples are also found nearby

You can find many restaurants and food vendors nearby.  East Indian and seafood are common in the area. Pork Vindaloo and sorpotel, chicken ramen, stuffed pomfret, dry Bombay duck chutney, Rotis, prawns chilly fry, and fried Bombay duck are the famous dishes.